Peace for Pets Board Members 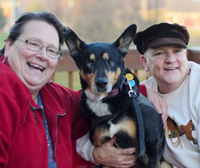 Joy Wagner was born and raised in Cleveland, Ohio. She graduated from Hiram College in 1978 and in 1988 from the University of Akron, School of Law. After several years with the Stark County Public-Defender's Office, Joy entered private practice in 1991. She actively practices law in northeast Ohio with offices in both Summit and Stark Counties (in Barberton and Canton, Ohio).

In addition to the companion pets living at Triple J Rainbow Ranch, Wagner’s law office in Barberton, Ohio is home to 5 rescued pets: 2 guinea pigs (Laverne and Shirley) and 2 feral cats (Carter and Kennedy - named after US presidents) who came to Joy’s office from Woozez’ cat rescue for socialization; 7 years later, they still live there and jump in her clients‘ laps for petting. Finally, there is Greyson, a long haired grey Maine coon who was the ‘poster’ child for Peace for Pet’s first fundraising mailing. Wagner thought he was a feral stray when he wandered into her barn a number of years ago. She trapped him and after neutering him, found that he is domesticated and a real lover; so, he joined the group at the office. As a result, Wagner promotes advocacy for companion pets through her clients’ exposure to these critters.

Judith Snyder-Wagner was born and raised in Louisville KY where she lived until her move to NW Ohio in 1992. Judith has a BA in Social Work from Indiana University and a Masters of Public Service from Western Kentucky University. She worked as a social worker for 13 years. While working at Big Brothers/Big Sisters of Kentuckiana, public relations and fundraising were added to her job description.

Moving to fundraising at the University of Louisville, Judith began a 25 year career of fundraising at three colleges and universities across northern Ohio. She eventually began a private fundraising consulting company that evolved into teaching / training nonprofit organizations how to fundraise. 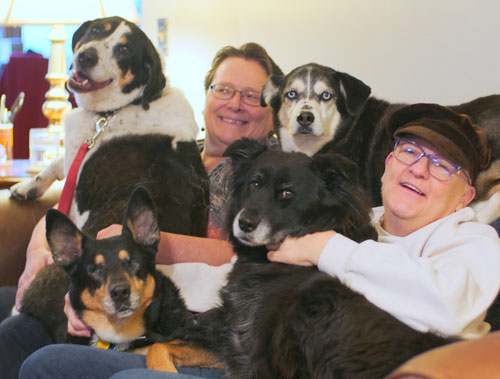 In 2001 Snyder and Wagner purchased a 15 acre mini-farm in Canton South, Ohio. For over 9 years, the two provided rescue, foster care and/or adoption services for over 185 rescued dogs and cats. Triple J Rainbow Ranch is currently home to 1 horse, 4 rescued dogs, 4 rescued cats, 1 feral barn cat, and two humans who work to pay for these critters!

In 2010, they took their animal advocacy to the next level and founded Peace for Pets, Inc. In that same year they married in Iowa and legally became Snyder-Wagner. Peace for Pets is a nonprofit organization whose mission is to assist victims of domestic violence with its Safe Haven for Pets foster care program; to develop community education for the public in all areas of the humane treatment of animals; and, to promote Trap-Neuter-Return (TNR) as the only effective and humane method for controlling the feral cat population. 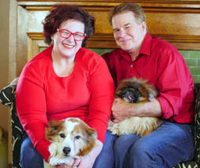 A mutual love of pets and an empty nest brought Mike and Tawny Burkhardt to the Peace for Pets organization, where they have served as board members for 2 years.

Between the two of them, Mike and Tawny have been Licensed Social Workers for over 60 years! They met while working together at their first social work jobs in community mental health. Currently, both work at Crossroads Hospice where Mike is a Hospice Social Worker and Tawny is a Bereavement Coordinator. Their experience and expertise as Social Workers brings tremendous value to their role as board members for Peace for Pets.

Their jobs continue to contribute to their dedication to Peace for Pets. Tawny is a Certified Grief Recovery Specialist, which includes leading Grief Recovery for Pet Loss. Mike has a part-time job teaching Anger Management classes for individuals mandated by the court for domestic violence charges.

Mike and Tawny’s greatest accomplish is their son, David Daniel, who lives in New York City pursuing his dream of becoming an Actor. Throughout their 28 plus years of marriage, the Burkhardt family has owned enough dogs, cats, rabbits, hamsters, guinea pigs and lizards to open a zoo.

Their current 'fur' family consists of four senior pets, Daisy, Tod, Lilo and Olaf. (They are avid Disney fans and every pet gets named after a Disney character). Mike and Tawny love to foster small dogs and even offer pet sitting through Rover.com 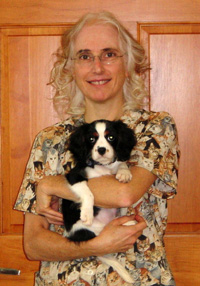 “Dr. Pam” decided to become a veterinarian at age 14 after witnessing an unsolved disease which affected many horses in her hometown. Dr. Fisher graduated with a BS from The Ohio State University and then the OSU veterinary school in 1982. She practiced traditional small animal veterinary medicine for over 15 years.

After many years in traditional small animal practice, Dr. Fisher felt that alternative choices would greatly benefit our pets and she pursue holistic education seminars across the country. Dr. Fisher has practiced holistic veterinary medicine for 15 years.

A member of the American Holistic Veterinary Association, Ohio and American Veterinary Medical Associations, Dr. Fisher she uses holistic and alternative methods to increase the vitality and health of our pets in northeastern Ohio.